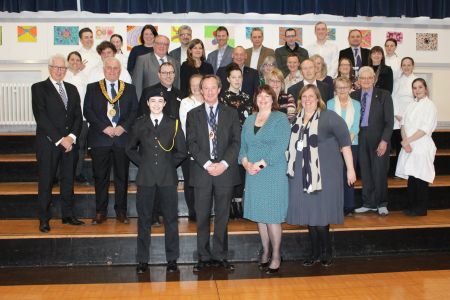 A thank you event to salute George Vestey’s one year as High Sheriff of Suffolk has been held in Haverhill.

Community leaders in the town joined together to thank Mr Vestey for helping to put Haverhill on the map during his time in the ceremonial role.

An intimate gathering was held at Castle Manor Academy last week and saw local individuals, groups and dignitaries unite to pay tribute to Mr Vestey’s work, ahead of him stepping down this week.

The event was the brainchild of Sarah Howard, who said: “We wanted to put on an event to thank George for his outstanding work as High Sheriff of Suffolk, and in particular his help and support in promoting Haverhill.

“For both individuals, businesses and organisations, he has been a fantastic servant of the town during the last year.”

Among the guest speakers paying tribute to Mr Vestey was John Mayhew, chairman of ONE Haverhill Partnership, who worked with the High Sheriff on a volunteer garden party last year and the launch of Haverhill 4 Jobs.

Vanessa Whitcombe, headteacher at Castle Manor Academy, also praised Mr Vestey for flying the flag of the school after initially working together when HRH the Earl of Wessex visited in March of last year.

Mrs Whitcombe said: “On behalf of all out staff and students, I would like to thank Mr Vestey for becoming a real friend of the school and helping Castle Manor to raise its profile through the work of the High Sheriff.”

Mr Vestey admitted he was “humbled” by the event and the kind words of the guest speakers.

“This is something I will continue to do as my year as High Sheriff comes to an end.”